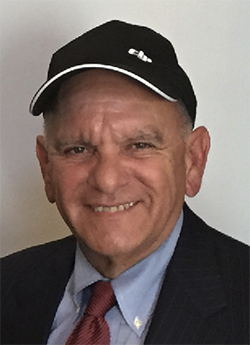 Lieutenant Commander R. George Rey Sr. retired from the United States Navy after completing 33 years of active duty in the Navy’s Submarine Service. During that period, he served on five submarines, two major staffs, and two tours in the Pentagon. Commander Rey started COTS Technology, a consulting company, supporting industry, academic, and government entities in operational and research endeavors with a focus on robotic systems.

Commander Rey’s most recent activities established the Unmanned Aircraft System (UAS) program at Nicholls State University’s Geomatics program, the first in Louisiana to receive an FAA-approved Certificate Of waiver Authorization (COA) to fly in the National Air Space (NAS) in 2005. He established the Louisiana Pelican Chapter of the Assoc. of Unmanned Vehicle Systems International (AUVSI) and leads this statewide organization as the founding president.

Commander Rey continues to work with companies to develop their UAS programs that meet the FAA’s Part 107 requirements. 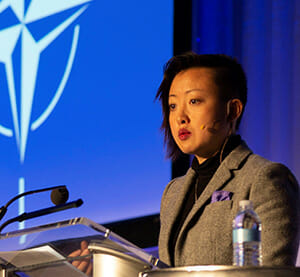 Evanna Hu is a nonresident senior fellow at the Atlantic Council’s Scowcroft Center for Strategy and Security and CEO & partner of Omelas, an AI and machine learning company working on mapping the online information environment. She is a subject-matter expert in messaging and propaganda of countering violent extremism and counterterrorism in both Salafi-jihadism and neo-Nazism and has worked at the intersection of governance, security, and technology in Europe, the Middle East, and Africa, including Kenya, Iraq, the Gaza Strip, Syria, Tunisia, and Afghanistan.

Prior to Omelas, Evanna founded technology ventures in Nairobi and Amman. To date, she has briefed six national heads of intelligence and advised 12 cabinet or ministerial members on technology and security. At the Atlantic Council, she specializes in emerging technologies for NATO and member countries with a focus on AI and 5G. A graduate of the University of Chicago, Evanna sits on the boards of the nonprofits Defense Entrepreneurs Forum; Re:Coded, which teaches refugees how to code through a training program in Iraq and Turkey; Promote Leadership, founded by active officers and veterans to foster inclusive leadership within the US Special Ops Forces community; and the Zaka Khan Foundation, which does reconstruction work in post-Islamic State towns in the Nineveh Plains, Iraq.

Mark Anderson is the founding CEO of startup Pattern Computer Inc. and chair of the Future in Review (FiRe) conference, which The Economist has named “the best technology conference in the world.” He is the CEO of Strategic News Service and publisher of the weekly SNS Global Report on Technology and the Global Economy, read by Bill Gates, Elon Musk, Vint Cerf, Michael Dell, Craig Venter, Jeff Bezos, Bill Janeway, Paul Jacobs, Leroy Hood, and technology executives and investors worldwide.